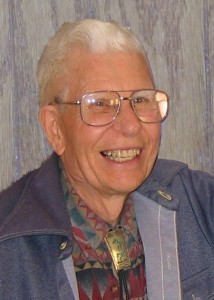 Bernie Haines, a long-time Glenwood Springs resident, passed away on February 6, 2010 at the age of 87. Bernie was born in Lore City, Ohio on June 1, 1922 to Frank and Blanche (McGrew) Haines.

He lived in many locations around Michigan and Ohio during his childhood. His father owned a drilling rig and moved from place to place, taking core samples for oil companies.

Bernie received a B.S. in Chemistry from Adrian College in 1944. With World War II ongoing, he was immediately employed at Oak Ridge National Laboratories as part of the scientific community that developed the atomic bomb. In March of 1946, he married his college sweetheart, Georgia Van Amburg.

In 1952 Bernie and Georgia moved to Colorado Springs, where he was production manager at Emerson Electric Co. Their daughter, Katrina, was born in 1955. For several years they owned and operated a turn-of-the-century summer resort in Green Mountain Falls, CO.

The family moved to Glenwood Springs in 1962. For the next ten years, Bernie taught science at Basalt High School. During that time he also attended summer school and received an M.S. degree from Miami of Ohio. He inspired his students to do creative science projects, and many won statewide recognition in science fairs. His students remember him for his unusual classroom experiments and sense of humor.

In the early 1970’s he launched into a career as a free-lance inventor and scientist, which had always been his dream. He obtained several patents, and became well known for the invention of the Solar Pathfinder, which is still widely used to optimize solar energy installations. Bernie continued inventing and tinkering in his shop until he lost his eyesight to macular degeneration in 2005.

Bernie designed, built, and remodeled all sorts of equipment over the years, including a gold sorting machine for prospecting and kilns for firing ceramics. He enjoyed the challenge of finding a creative solution for any problem he encountered.

In addition to his love of science, Bernie enjoyed working on projects for and with his grandchildren. He was playful and loved to joke with his family. His favorite outdoor activities included camping, fossil hunting, prospecting, and bird watching. Bernie will be remembered as a devoted husband, father, and grandfather.

He was preceded in death by his parents, sisters Mildred and Rosamond, and one nephew. He is survived by his wife of 64 years, Georgia, his daughter Trina Haines, son-in-law Bruce Wampler, grandchildren Van and Risa Wampler, and many nieces and nephews.

A memorial service will be held Saturday, February 13th at 2:00 pm at Good Shepherd Lutheran Church. Interment will follow at Rosebud Cemetery. In lieu of flowers, please contribute in Bernie’s name to Hospice of the Valley at P.O. Box 3768 Basalt, CO 81621

You are welcome to share memories and other thoughts as a reply on this page (scroll to the bottom of the page for the reply form).